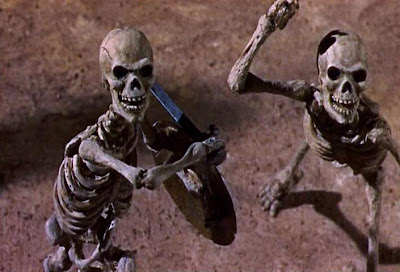 The climactic cat-fight from the final episode of Desperate Housewives, 2011.

After being admitted into the ranks of the master-poisoners, professional monstrosities and whoremonger-assassins of l'Academie Sinistaire [see the previous entry], I was granted an official position as head of one of my father's own experimental facilities. These laboratories had previously been home to some of his most endearingly murderous creations, and now it was my role in life to refine the classic designs of nineteenth-century eugenics for a new age, to devise - so to speak - a Better Giant Scorpion.

At that time, the most fashionable and profitable field of research was longevity. True, my own father possessed the secret of eternal life, but his survival over a period of centuries was a highly involved three-stage system which required him to (1) die; (2) control an army of fanatical underlings who would move Heaven and Earth to recover (and ritually purify) his corpse; and (3) return from the grave when the forces of law and order were least expecting it. This process was becoming somewhat awkward, especially since the forces of law and order increasingly expected him to return from the grave, thus forcing him to wait for longer and longer periods in order to complete step (3). Besides which, it was felt that the "dying" and "controlling an army of fanatical underlings" elements were too time-consuming for most consumers, and that there was a definite niche for a more market-friendly form of immortality.

Cosmetics was clearly the wave of the future, and much capital was poured into expeditions to find the Fountain of Youth, as preliminary reports had suggested that its waters might reverse at least five of the Seven Signs of Ageing. For many years, it was believed to be mythical, the argument being that if such a fountain existed then the African continent would be overflowing with eternally young native populations. In fact, it was finally located in a region of central Africa which had been mapped by errant American adventurers, who had failed to realise the significance of the fountain and simply attached a "No Coloureds" sign to it. Another promising discovery was the Flame of Life possessed by the beautiful Queen Ayesha, "She Who Must Be Obeyed", though the regenerative effects of this process were brought into question when it was discovered that many of her followers had begun to refer to her as "She Who's Getting On a Bit, But You Still Would, Wouldn't You".

Myself and my compatriots took a more pragmatic view of the youth-and-beauty industry. As citizens of the twenty-first century, you may be familiar with a skin-moisturising product known as "Hydra Energetic", and I can reveal that it was our laboratories which first developed this balm. The original formula only differed from the modern product in that we used real Hydras. As will become apparent if one consults the excellent documentary Jason and the Argonauts, the Hydra was a many-headed reptile which grew two new heads whenever one was divorced from its body, and we quickly realised that this was a boon in terms of mass-production. We eventually dedicated an entire factory to the purpose of head-culling, in which the machinery was tuned to remove (and process) each new head within moments of its growth.

The flaw in this method - and again, those familiar with Jason and the Argonauts will already be aware of the difficulty - is that the teeth of a Hydra can easily grow into fearsome skeleton warriors, who are immune to most forms of weaponry and can only be slain if led off a cliff. We took the precaution of siting our factory on the edge of a small Cornish island, with a special bone-chute leading directly out into the sea. Our competitors, copying our methods with reckless abandon, were less careful. In particular, the L'Oreal company had endless problems with skeleton warriors getting into the machinery or attempting to form unions. Though L'Oreal now uses "Mock-Hydra" in its Hydra Energetic, a few of the living skeletons created in this early period are still in existence today: emaciated, unwanted husks, they continue to haunt the company even though they clearly have no place in the modern world. This explains why Andie MacDowell is still L'Oreal's spokesperson.

The only side-effect of our own manufacturing process was that the seabed off the coast of Cornwall become littered with thousands upon thousands of human bones, but in recent years, we have discovered this to be an excellent way of attracting televisual osteo-archaeologist Dr Alice Roberts.
Newer Post Older Post Home