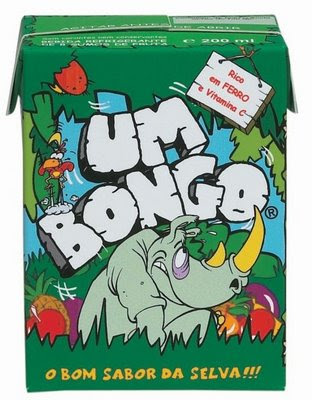 You can witness the full horror of the Congolese breeding experiment by typing "Um Bongo" into YouTube, or by imagining what it'd be like if actual terrifying events in the Congo were replaced by the antics of cartoon animals.

'Way down deep in the middle of the Congo,
A hippo took an apricot, a guava and a mango.
He stuck it with the others, and he danced a dainty tango.
The rhino said, 'I know, we'll call it Um Bongo!'

The python picked the passion fruit, the marmoset the mandarin,
The parrot painted packets that the whole caboodle landed in.
So when it comes to sun and fun and goodness in the jungle,
They all prefer the sunny, funny one they call Um Bongo!


After eighteen months working as an undercover agent in Africa, this was the report I sent back to British Intelligence. They failed to act on it until it was far, far too late.

But I should explain how I came to be in this unsettling position. After my expulsion from l'Academie Sinistaire and my separation from my father's criminal empire [see previous entries], I found myself prone to long periods of adolescent rage and depression, during which I elected to take the Queen's shilling and sign up with the British military. This may seem an improbable career move, yet there was a distinct logic in it. Firstly, though my father may have been a half-blood abomination and one of the world's leading racial stereotypes, my mother was not only English but the daughter of a military family. My maternal grandfather fought with Wellington at Waterloo, and I use the phrase "fought with" quite carefully. The dispute began when Wellington stole my grandfather's Hob-Nobs: my grandfather responded by taking the boots which would one day share the Duke's name, and filling them with Frenchman's sick (which was, at the time, regarded as the most insulting variety of sick). Yet more importantly, the army life provided me with refreshing new arenas for criminal exploitation and barely-concealed sexual parasitism. I soon found myself under General Gordon in the Sudan, and again, I use the word "under" quite carefully. A corps of sweating, hormonal young men, all of them missing the comforts of home; a city whose prostitutes were, quite frankly, pricing themselves out of the market; all it takes is for somebody to shout "bundle!" in the barracks-room, and one can easily find oneself buried beneath a sybaritic mound of male flesh and handlebar moustaches, with the officer class in their rightful position at the top.

It should be remembered that at this point I was still, in modern parlance, a "teenager". It should also be remembered that in the nineteenth century, a great many adolescents had been granted far too much power over their fellow man, even beyond the young Prince Albert's insistence on using Negro midgets to play conkers. Ever since I mentioned the doctrine of "maternal impression" in this journal (the theory that if a woman should happen to be startled during pregnancy, then her child might take on the form of whatever object may have startled her), I have repeatedly been asked why the people of the Victorian age failed to exploit this strange biological quirk. The truth is that many did, but for the most part only the teenagers, who had nothing better to do. One would often see young scientists of the "evil" persuasion, loitering at bus stops in their top hats and Evanescence T-shirts, waiting to leap out at passing mothers-to-be after donning the likenesses of apes, spiders, and other such alarming creations. If one of these students caused an expectant woman to faint, then he would high-five his colleagues, confident in the knowledge that she would soon be giving birth to a child with pronounced mandibles or the wrong number of eyes.

You may have heard of the notorious Dr Moreau, from the account of his career penned by H. G. Wells, in which we learn that Moreau stocked his secret island with half-human, half-animal monstrosities of his own devising. What the book fails to record is that the doctor was only nineteen at the time, and insisted on breeding men with beasts because "monkey-people would be, like, really cool". As it happens, it was Moreau's experiments in Africa which first brought him to the attention of the authorities, and once I had been transferred from the army to British Intelligence - a favour granted by General Gordon, grateful to have had such a sensitive and "giving" young private under his command, if only for a few magical weeks - my first undercover assignment related to the unusual animal activity in the Congo region. As we have already established, what I found there was an aberrant ecosystem of dancing hippopotami, snakes capable of harvesting fruit for a capitalist incentive, and exotic birds with a rare artistic streak. I still occasionally hear their terrible war-cry in my dreams, though I confess that it did eventually make a catchy jingle.

I would also like to mention that according to Sax Rohmer's (generally absurd) accounts of my father's life, he dressed in traditional Oriental robes and kept a marmoset as a familiar. If one were to consider the "Um Bongo" report in this light, then the otherwise grammatically-puzzling line "the marmoset the mandarin" may take on a new significance. Certainly, I have grave suspicions as to who might have funded Moreau's operations in the region. It amazes me that even now, few of those who read the report see anything strange about the presence of a small South American mammal in the African jungle.
Newer Post Older Post Home