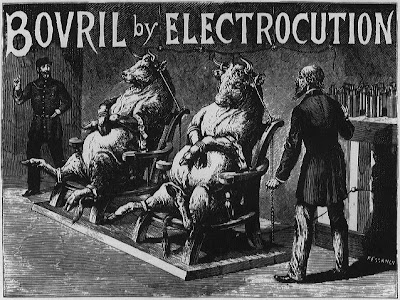 Sponsored by the Texas branch of the Angus steakhouse.

I shall gloss over the latter part of my career in British intelligence [see Africa], and merely note that it was my experiences in the darker and less sanitary reaches of the Empire - most particularly the affair of the White Iscariot, a tale for which the world is not yet ready, or at least for which the world has not yet offered a six-figure advance - which convinced me that my future lay in the future. I had, of course, travelled from the nineteenth century to the twenty-first on many occasions: as I may have intimated, my father was one of the loudest voices in the great "what's the best way of going forward a hundred years, being frozen in ice or using a special chair?" debate of 1895, and the early experimental process of time-travel was at least partly responsible for my current (thoroughly disfigured) condition. Yet until this point, the future-world of neon lights and utterly transparent government arms deals had been nothing more than a novelty. Now, I came to realise that the twenty-first century was destined to be my home no matter what, at least if I lived long enough and kept taking the monkey-gland serum.

Following the example of the so-called "Elephant Man" [see Merrick, Joseph], I saw that I might make something of a living as an attraction in the media circus of the latter twentieth century, since the audiences of this era were likely to enjoy my many anecdotes about life as the son of one of the world's best-known human abominations. I was correct in this assumption, though due to the social mores of the age, I found that I was only invited onto the chat-shows of the 1970s if I could make these anecdotes involve golf in some way. I had similar difficulties in the late 1990s, especially when called upon to act as a historical pundit for the BBC's I Love 1871. After being seated in front of a camera and given basic instruction in the importance of the sound-bite, I was asked: "The Franco-Prussian War… what was that all about?" I responded by explaining that it was largely about Bismarck using the humiliation of France as a pretext for the reunification of Germany, and though the producers agreed that this was factually accurate, they felt that Johnny Vegas would probably be funnier.

It was only in the early years of the twenty-first century that I began to understand how one might properly exploit the mass-media to one's advantage. The turning-point came when I was hired as a consultant on the series Whore Idol.

Since I rarely stay in one era for more than a few months, I confess that I can no longer recall whether Whore Idol has already been broadcast in your world of 2008, or whether it may still be a year or two in your future. But all reputable critics agree that it was the epitome of the audience-participation game-show, and that its catchphrase - "One Ripper, Five Victims, Sixty-Million Witnesses" - encapsulated the Zeitgeist of its day. When the format of the programme was first conceived, there was some concern that it might find itself short of contestants: there was a feeling amongst the more conservative commissioning editors that few young women of the modern age would willingly compete to be transported back to Whitechapel in 1888 and ritually gutted by a pathological misogynist, even on prime-time ITV. How very wrong those nay-sayers were. In fact, the programme's only failing was that after the first ratings-grabbing Autumn of Fear, there was nowhere for the format to go. A second series was staged in Yorkshire, but without the fog, malnutrition and poisonous miasma of the Victorian original, it was never likely to have the same impact. I believe a celebrity version has now been proposed, yet so far only Phil Spector has shown any interest in taking part, and only on the "giving" end.

Speaking for myself, Whore Idol taught me a lesson so obvious that with hindsight it seems entirely instinctive: quite simply, television is cruelty. In much the same way that a young street-urchin or adolescent thug will be far more willing to rob, stab, or generally abuse an innocent bystander if there are other street-urchins in the vicinity to watch him do it - in much the same way that a man will happily laugh at a cripple if there are other men to laugh along with him, or that a mob will tear a victim to pieces in ways which might seem unconscionable to a single human being - the inevitable result of pointing cameras at an entire population is that the population will begin to destroy itself purely for the sake of anyone who may be watching. Whenever one hears a news story to the effect that an urban hoodlum has randomly assaulted a member of the public, for no other purpose that to film the attack and display it on your modern-day "YouTube", one may be assured that this is in no way aberrant behaviour. This is simply what the concept of television does, when one takes away all pretence of "standards of decency".

I feel confident in stating that here in 2008, this rather twentieth-century "standards of decency" concept is wholly alien to the population, or certainly to that part of the population which is actually responsible for television. It is, after all, an affront to consumer freedom. This understanding is what made Whore Idol such a success (or, perhaps, such an inevitability), and it was during its production that I "found my voice" in the modern world. Because television is, not by its content but by its very nature, the most evil of all media.
Newer Post Home