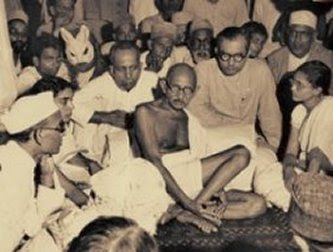 The Mahatma's open address to the Muslim and Hindu clerics of India, 1946, with myself in attendance (third row, second left, in the distinctive devil-rabbit mask). The individual with whom I can be seen sharing a joke is a carefully-disguised Bernard Bresslaw, studying for his later role in Carry On Up the Khyber.

As one might have expected, much of my life has been spent in my father's shadow, or avoiding my father's shadow, or living in mortal fear that my father may find a way of detaching his shadow from his person and sending it up a drainpipe to strangle me during my sleep. Indeed, there was a period in my younger days when I would actively deny my heritage, always answering "no" to the question "were you force-bred by appalling and inhuman means during the 1870s as the heir to the planet's second-most grotesque criminal empire?". Even on those occasions when I would answer "yes", I would at least attempt to appear ironic while doing so.

I have even denied his very name. On occasion, I would meet representatives of high society - ignorant of my true identity - who would politely question my father's nature, and ask to what profession and class he might belong. To which I would lie, and answer: 'I fear my father is dead. He died of the Big C.'

I was of the belief that this amusement, being a pun, would work rather better during society soirees than on the printed page. Yet without exception, those with whom I was in conversation would simply stare at me, bemused. After a while, I realised that the joke would probably be more successful after 1912, when the Titanic would actually sink.

Eventually, while on an armaments trading excursion to 1914, I received the perfect opportunity when an eminent Germanic prince said to me: 'You are very young for zis sort of vork. Vere is your father?'

To which I replied: 'I fear my father is dead. He died of the Big C.'

'The Big C?' the prince inquired.

He simply stared at me, bemused. Through his monocle.

And then it occurred to me: perhaps this joke would be more successful after the mid-1970s, when the American actor John Wayne would coin the phrase "the Big C" as a euphemism for cancer, in order to make his own crippling disease sound more masculine and to give the impression that he was about to be gunned down in the street rather than shrivelling up into a weakened husk. Before the mid-1970s, it rather lacked something.

For many years, I bore a grudge against John Wayne, whom I saw as singularly responsible for the failure of an otherwise promising two-liner. When I eventually inherited one of my father's experimental facilities, I found a way of venting this resentment. I used the laboratories to groom a selection of cancer cells into six-foot-tall masses of carcinogenic tissue with formative arms and legs, then equipped them with black hats and six-shooters, and dispatched them to the mid-1970s with instructions to actually gun down John Wayne in the street. It pleases me to say that the Cancer Gang completed this mission with some gusto, although I note that Wayne's encyclopaedia entry still glosses over events by stating that he "died of cancer" rather than "died of a cancer that was quicker on the draw".

To this day, I still exchange Christmas cards with the leader of the Cancer Gang, Big Jim McTumour. I believe he now has plans to stand for election as the governor of some US state or other, having already acquired the backing of one of the larger tobacco companies. I wish him well in his career.
Newer Post Older Post Home