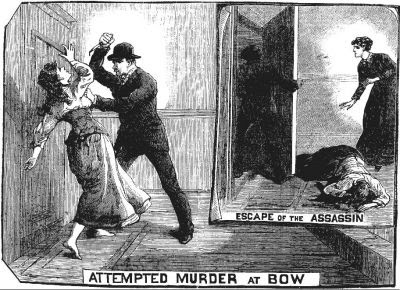 Tips for the nineteenth-century predator, number two: try using doors to escape the scene of the crime. The diagram shows you how.

It could be said that although I may not have been precisely destined for my role in life, I was at least designed for it. As we have no doubt already established, my father possessed one of the most inventive, most tortuous, most convoluted minds of the nineteenth century, and it can be considered a testament to his genius that he could use this great intellect to sire a child without the immediate intervention of his body. Amidst the criminal underworld of the age, his creations were as numerous as they were unseemly. His particular field of interest lay in the biological sciences, with particular reference to the breeding of giant scorpions, poisonous fungi, and the occasional gigantic glowing hound. What he lacked was an obvious heir.

My father was quite careful about the manner of my siring. It should be remembered that until the early years of the twentieth century, there was a common belief in the theory of "maternal impression": the notion that if something distressed the mind of an expectant woman, then the nature of her fear would imprint itself upon her unborn child. It was believed, for example, that "Elephant Man" Joseph Merrick gained his unsightly form because his mother was startled by an elephant while he still lay in the womb (though since his mother spent most of her life confined to her home in Leicester, being startled by an elephant would surely have been more of a freakish occurrence than giving birth to a hopelessly deformed child… we shall return to the Merrick family later). And I should say now that despite the pooh-poohing of the modern medical establishment, I believe the doctrine of "maternal impression" to have more weight than current thinking would suggest. True, we might ask questions such as "if a child always looks like the thing that scared its mother, then why weren't more children born looking like the opening titles of Tales of the Unexpected in the 1980s?", but the theory would explain a great deal.

It would, for one thing, tell us why so many men resemble enormous cocks. An awful lot of women must surely be terrified by enormous cocks, either at the moment of conception or shortly beforehand. Other women may be scared of pregnancy, and sure enough, many children are born looking like babies (though not in my father's house, as this would have been considered common). Indeed, we might stretch the theory and suppose that children may also resemble what the man was afraid of during the procreative act, which would explain why Michael Portillo is the very image of Going Floppy Halfway Through.

Though I may have been conceived by my father's disembodied hatred of all other human life rather than his physical presence, I nonetheless had to spend the de rigueur nine months within my mother's womb before my birth. During those months, my father took full advantage of the biological doctrines of the day. Determined that his firstborn son should be an unapologetic monster, capable of taking on his own mantle, he scientifically tormented my mother with every horror known to humanity in the hope that some of it might "rub off" on me. Sure enough, after suffering those nine months of abuse, agony and psychological torture, my mother gave birth to a child who bore a striking resemblance to the thing she feared most: my father. This alone should be proof that "maternal impression" holds at least some truth.

In today's world, I notice that many children bear striking resemblances to their fathers. This is, I think, a sad indictment of the way men still mistreat women: if their mothers were so appalled by their fathers' behaviour that the fear imprinted itself on the embryo, then few families can be truly close. Whenever I see a child that does not resemble its father - perhaps through having hair of a colour which matches neither parent, or through being of a different race altogether, as happens a great deal on London's council estates - I congratulate those parents on presenting such a fine example of a happily-integrated family unit. I remain astonished at how frequently this is taken to be a form of sarcasm.
Newer Post Older Post Home