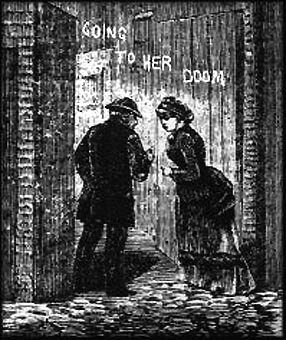 Tips for the nineteenth-century predator, number one: though you may have difficulty remembering your plan, do NOT write your intentions in large chalk letters on public fences, as this may alert your prey that something is amiss. In most cases, a post-it note will be quite sufficient.

I should begin by offering a word of congratulation, even thanks, to those who may be reading this journal in the "modern" age: I find the early twenty-first century to be a most satisfactory era from which to organise a gargantuan underworld empire, and would thoroughly recommend it as a place of business for any mastermind of the Victorian persuasion who might find himself frozen in ice for 120 years, transported through time by a chair with large brass levers attached, or simply spirited into the future by a magic fog. Indeed, so suitable is this epoch that I now spend at least three months of every year in 2008, and would probably spend more if such a thing were permitted by the British tax laws.

Naturally, I find it unwise to spend the same three months of every year in 2008. The exact period of my stay is governed by the activities in which I find myself engaged. The act of Sinister Plotting is very much an affair for the spring, a time when Parliament is in session, and politicians of the lower orders can be bribed to ignore the great Chav-boats that carry "urban" slaves out to sea along the Thames (and thereafter to the "urban" rubber plantations of the 1800s). By the same token, Sinister Brooding is an event for summer; Sinister Market-Gardening is best suited to autumn; and it may be considered gauche to attempt Sinister Tobogganing in any season other than winter. By and large, however, I attempt to spend my time in those weeks of 2008 which - by law and custom - are set aside for the shooting of the Famous Grouse. Those of you who have never undertaken this pastime should consider doing so as soon as your social circumstances permit. Shooting the Famous Grouse is perhaps the finest of all sports, since it combines the twin activities of grouse-shooting and celebrity stalking. This makes it 100% more Sinister than any other gentlemanly pursuit, which I find saves time.

I would, in fact, go as far as to say that the wildlife of your century is of the greatest interest to me. Please bear in mind that although I consider myself well-travelled, all natural-born citizens of the nineteenth century are parochial by twenty-first-century standards. Television is not something with which I was raised, and in its modern sense, "celebrity culture" is both a wonder and an abomination: in my youth, we created our own equivalent of Heat magazine by cutting bits off a dead Frenchman's face until his countenance resembled that of a well-known public figure in an embarrassing pose. I remain amazed that in your "modern" era, satellite broadcasting and digital television have allowed you to ignore the entire world simply by flicking a switch. And more than any other genre, I feel the wildlife documentary to be the most fascinating product of this global culture. It constantly astonishes me to see such remarkable, far-distant vistas of the natural world, and to witness the staggering array of exotic creatures which my own generation somehow failed to hunt to extinction. I occasionally even travel back to my native century, specifically to hunt down and slaughter an animal whose existence has only been made known to me by one of these programmes, just to see the look on David Attenborough's face when he reaches the end of his four-thousand-mile-trip to the Serengeti and finds no life there whatsoever.

On these occasions, Mr Attenborough may not even recall his reasons for visiting the region, though a half-formed tear in his eye often hints at a partly-understood sense of loss. Should ever you find yourself sitting through an episode of Life on Earth and thinking, "hang on, didn't there used to be more animals in this?", then you now know the cause. I look forward to the day when I might even have the ability to travel into the prehistoric ages, there to hunt the behemoths of the Jurassic into an early grave, simply for the joy of watching the BBC's Walking Without Dinosaurs. 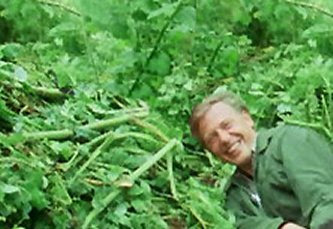 David Attenborough tells his camera crew that he had a dream about something large, black and hairy sitting behind him here, although he can no longer remember what.

To resume: it has been put to me that I might wish to share these thoughts and memories, reflections on a life which - by various methods of experimentation and genetic vampirism - has so far spanned three centuries. It has been suggested that I should do this partly for the sake of posterity, but mainly in the hope that it might lead to some expansive television adaptation featuring this era's leading actors, comedians, and prostitutes. I understand that aethernet "blogs" of a controversial nature are something of a current fashion, and that in one instance, the musings of a particularly supple London harlot become a successful televisual production entitled The Secret Diary of a Call-Girl. Since even the greatest engineers of Victoria's Britain failed to develop a means by which something could still qualify as "secret" after being published on the world's most accessible information medium and then broadcast to every home in the nation, I once again find myself impressed by twenty-first-century ingenuity, and remain curious as to how this programme was prevented from falling into the hands of foreign powers. I trust, however, that my own aether-journal will be as great a success. And that my own part will be taken in the dramatic version by that man from Life on Mars, the one everybody likes.

(Although on this subject… I confess, the rapid disappearance of history's wildlife may be having an adverse affect on the British Broadcasting Corporation's dedication to factual programming. Whereas Life on Earth was a serious and commendable attempt to record our planet's rapidly-contracting biosphere, Life on Mars seemed somewhat less credible in its depiction of a coherent ecosystem. Though it was entertaining to see now-extinct species like Racist Policemen Who Are Also Somehow Meant To Be Amusing and Mancunians With A Sense Of Civic Pride, many of the sequences appeared to be unconvincingly staged rather than filmed in the creatures' natural environment. And I believe myself to be correct in saying that the "get hit by a car and knocked thirty years into the future" method of time-travel was utterly debunked by Faraday in 1865, after he ran over James Clerk Maxwell's legs with a twenty-four-horse "time carriage", not entirely for scientific reasons.)
Older Post Home