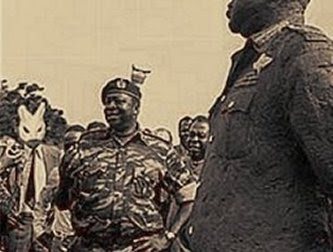 The Syndicate's trade mission to Uganda, 1974 (with myself on the far left, in the distinctive devil-rabbit mask), during which it was my privilege to explain the potential of Evil Ventriloquism to General Amin. Mere minutes after this photograph was taken, the gentleman on the right was sentenced to execution, having apparently been heard to say: 'Who d'you think you are, fatty, the King of Scotland?'

I have already stated that my father sired me with the express desire of creating an heir, a first-born son to continue the family name should he somehow forget the secret of eternal life, or suffer some accident that might preclude any possibility of his returning from the grave. It must be said that as a child, I showed great promise in this direction, and it was agreed in underworld circles that I would be a most suitable replacement if the unthinkable were to occur. My father was determined that I should begin at the bottom, both figuratively and literally, as a "fag" to one of the less seemly gang-lords of nineteenth-century Limehouse. The concept of "fag" was taken a great deal more literally in those days, since one's elders would inevitably feel a deep-seated religious shame after exposing an underling to their bestial inclinations, and many fine young catamites were set alight after the act as a method of purging their masters' guilt. Of course, it was always part of my "design brief" that I should be flame-retardant, hence my father's interference in the lactations of my mother [see Family]. Indeed, I once spited my employer by immolating myself during the cruel act of sodomy, thus earning myself the nickname "Johnny Kebab". This alone was enough to guarantee my notoriety, even before I came of age.

And so, as I entered puberty, I became the youngest-ever initiate of l'Academie Sinistaire in Paris. Across the centuries, this institution has been responsible for some of the world's most impressively monstrous and amoral talent. Springheeled Jack; Chairman Mao; Idi Amin; that man who tried to rape Steven Spielberg; all of them show clear signs of the academy's influence or conditioning. While the Royal Society has oft been referred to as "The Invisible College", l'Academie Sinistaire has become known as "The Invisible College That's Probably Standing Behind You Right Now". As a highly-regarded figure in such circles, my father merely had to pull a few strings in order to guarantee my interview with the academy's Five-Man Council, having already ensured that strings were attached to the limbs of over half its members. He saw himself as the great puppet-master of the underworld, and had little time for the purely metaphorical.

The presence of Miss Imbruglia on the Council would come as a surprise to many, yet it should be pointed out that she was very much a "stop-gap" member of the assembly, hurriedly introduced to the upper ranks of the academy after the disgrace of the Man With the Child in His Eyes. The Man With the Child in His Eyes had always been regarded as something of a weak link, but it had eventually been pointed out that having a child in one's eyes is in no way actually sinister, just hugely unsanitary. Worse, it had come to light that the child had only become lodged there by accident. For years, it had been assumed that there must have been some plan behind it, perhaps a scheme so convoluted that even the other four Men remained ignorant of its true nature. But it had emerged that some time earlier, he had simply been cycling along a dirt track when a child had been thrown up into his eyes along with the usual dust and grit. He had never been able to remove it, and had thus spent some years nurturing it as an affectation.

The day of my initiation into the academy was perhaps the proudest of my life, and even now, I have difficulty remembering this period of my existence without a mixture of profound melancholy and curious arousal. I had no way of knowing that within a few short years, I would find myself leaving l'Academie Sinistaire in disgrace, or that this was the beginning of a schism between myself and my father which would never be healed.