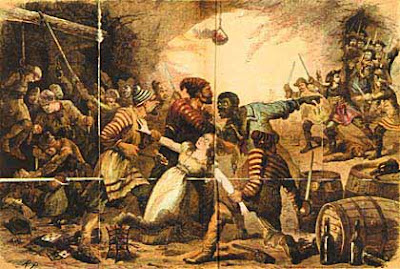 I remain unclear as to what might be happening in this picture, as I was drunk when it was taken.

Previously, I described my indoctrination into l'Academie Sinistaire, the institute responsible for educating some of the world's most appalling non-Islamic criminal talent. I related my appearance before the academy's Five-Man Council, an assemblage of legendary malefactors comprised of the Man Who Sold the World, the Man With the Golden Gun, the Man Who Shot Liberty Valance, the Man Who Broke the Bank at Monte Carlo, and Natalie Imbruglia (this last member being a hurried replacement for the Man With the Child in His Eyes, then recently disgraced). And I revealed that I had at length been made the custodian of one of my father's experimental facilities, with all the responsibility and man-eating octopi that this entails.

Perhaps this responsibility was too great for me; perhaps it was fate that I should fail, before even coming of age; perhaps it was entirely the fault of others, all of whom should clearly be killed. But before long I found myself brought before the Five-Man Council once again, this time in chains, accused of committing one of the gravest crimes imaginable in those diabolical circles. The official charge was "Leaving Alone Things That Man Was Meant to Meddle In", an offence that was considered an affront to everything for which the academy stood. To this day, I maintain that the entire affair was nothing more than the result of a simple clerical error: it was a busy day, there were a great many Things to be sorted into the relevant "To Be Left Alone" and "To Be Meddled In" stacks, and "tables" - one of the many, many things which the academy had ear-marked for meddling, after being left alone for far too long - was inadvertently filed in the wrong out-tray. An elementary error, and I still have to ask whether my punishment was commensurate with my failure. After all, I was never personally in charge of the filing. I shall not cast aspersions by naming the individual who made that fateful mistake, an individual who had been demoted to this bureaucratic role by the Council itself. I shall simply say that if he could have been bothered to get that f***ing child out of his eyes, then perhaps he might have been able to see what he was doing.

Yet it was I who had to face the academy's judgement. Called into the presence of the Five-Man Council, I was stripped; humiliated; abused; even violated. Then, once the pleasantries were over, my trial began.

The outcome was inevitable, the sentence lenient by academy standards. My position would be taken from me, my deformity would be reclassified as "ugly" rather than "monstrous", and - worst of all - I was to receive no more assistance from any criminal interest controlled by my father. Even once this judgement had been passed, I still hoped that my he might pull strings to reduce the severity of the sentence, yet it quickly became clear that he accepted the Council's ruling. When he eventually did pull strings, it was only to make the Council-members' arms flap around and make rude gestures at me. On that very day, my father turned his back on me: an uncomfortable experience, since his spine was tattooed with a picture of my own face being eaten by owls.

I have only a limited memory of the subsequent months. I recall that in my anger and self-obsession, I conceived of a truly juvenile revenge, and plotted to assemble my own Five-Man Council to rival that of the original academy. It was, of course, doomed to failure. The real stars of the underworld were already ensconced within the walls of l'Academie Sinistaire, leaving me with the second-rate figures of criminal society. The Man Who Sold the Welsh; the Man With the Pricing Gun; the Man Who Nudged Liberty Valance; the Man Who Broke Some Plates at Monte Carlo; and Natalie Imbruglia. It was a futile gesture, and this rival Council was dissolved after a single assembly. I forget, now, whether I mean that literally or not.

It was my darkest hour, and not simply because the Council gouged my eyes out as a "P.S.".
Newer Post Older Post Home