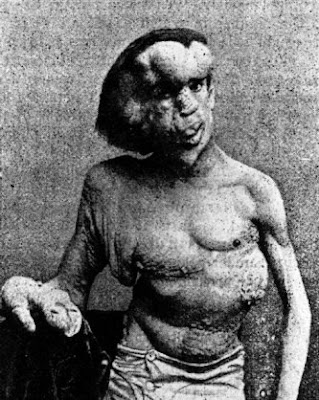 The Athena Company later admitted that the poster "wasn't quite as successful as the one of the topless man holding the baby".

Before going any further, I should raise a point of historical accuracy. In the modern age, sources differ as to whether the so-called "Elephant Man" bore the name of John Merrick or Joseph Merrick. As an erstwhile acquaintance of Merrick's, I should clarify the situation by explaining that although "Joseph" was the given name that appeared on his birth certificate, most of us referred to him by his nickname. We called him "John", because that was the name of an elephant we knew.

Though I knew him as a youth, I never met Merrick during his seminal "freakshow" period. I was reacquainted with him much later, when we were both making regular appearances on the 1970s chat-show circuit. You may recall that when the technology first became available for celebrities to travel between the nineteenth and twentieth centuries, navigation was still a difficulty. The most common contraption for making such a sojourn, far from being an elegant Wellsian time-machine of brass and leather, was Dr Barnado's Patented Chrono-Ambulatory Tunnel (then recently rebranded, having originally been launched as Dr Barnado's Patented Hole Into Nowhere for Getting Rid of the Little Bastards). In part, this would explain why so many B-list names of the 1800s became mired in the early twenty-first century, thus adding to the current celebrity-glut: I need hardly point out that no "modern" society, with a belief in mandatory schooling and universal literacy, could possibly have produced Kate Thornton. Merrick, however, had been fortuitous enough to find himself washed ashore in the 1960s.

This era, with its unique combination of post-imperial guilt and widespread interest in television wildlife programmes, was ideal for an artiste of his calibre and unusual bone-structure. Those familiar with television history will recall the notorious footage of his appearance on Blue Peter, during which he caused presenter John Noakes to slip on the wet floor. Merrick was embarrassed by this, at the time, but was able to laugh about it later. Especially after his colossal head caused his neck to tip back and deprive his brain of oxygen, at which point he found himself laughing at absolutely everything.

I met Merrick whilst appearing on the Parkinson programme in 1976, and we immediately renewed our childhood bond. I was pleased to converse with an individual more repellently scarred than myself, and in return, he was overjoyed to meet someone who never offered him a bun. The other guest on the programme that night was Johnny Morris, which irritated the Elephant Man somewhat: whenever Merrick would open his mouth, Morris would attempt to provide his voice. Merrick's subsequent stabbing of the presenter's face delighted me as much as it delighted the nation, yet in many ways, I now feel it represents his finest work. It was perhaps inevitable that during the 1980s, environmentalist groups would convince him to speak out against the ivory trade, but this obviously left us on opposing sides of the moral argument. He felt that the hunting of his elephantine blood-kin was an unacceptable anachronism in a twentieth-century world, while I felt that if the fabled Elephant's Graveyard never actually existed, then we should endeavour to create it. Suspecting that he was being "eco-friendly" simply to curry favour with the liberal '80s audience, I accused him of being a sycophant, and was rather put out when he interpreted it as an obscure racial slur.

Merrick died in 1890, on exactly the date prophesied by the history books. As a frequent visitor to the twentieth century, he was of course aware of his predicted demise, yet returned to that fateful day in order to complete an "ironic" photo-shoot for GQ magazine which was intended to make him "look dead". He had been assured that Health and Safety officials would prevent his actual passing, but sadly, they failed to take into account the inhuman quantity of cocaine in his system. Since plastic surgeons had grafted an actual trunk onto Merrick's face in 1983 - his own idea, an attempt to "live up to the dream" which may explain Michael Jackson's subsequent obsession with his bones - he had developed the party-piece of sticking the trunk into toilet cubicles to purloin other people's narcotics, and this was ultimately his undoing.

In 2007, a Channel 4 documentary team attempted to investigate Merrick's genetic makeup by analysing the DNA of his closest living relatives. As the programme explained, however: 'Merrick never had any children.' This may be the most unnecessary statement in the whole of human history.
Newer Post Older Post Home