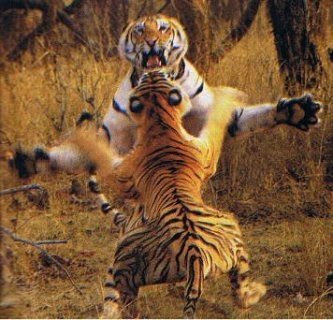 Though tiger-hunting is frowned upon in the twenty-first century, well-bred Victorian tigers would practice at being rugs while still in the wild.

As a lifelong bachelor, I have often been asked: "What do you look for in a woman?" To which I usually reply: lice. Especially if I happen to be purchasing her from one of the smaller and less reputable West African villages, in which case, checking the teeth is also important.

Questions of romance have been brought to mind, however tangentially, by a piece of correspondence lately received from a reader of this aethernet journal. He writes:

You've hinted in your blog that you were one of the first people to travel between the nineteenth century and the twenty-first, and I've been told that your family played some part in the development of commercial time-travel. Is this true?

Like a lot of people my age, I time-travelled for the first time in the early 1980s, when it was all new and exciting. The first time-machine I ever saw belonged to a friend at school, whose parents were always the first to get new gadgets. It was one of those clunky old Betamax time-machines, and the tapes you had to feed into them were about the size of a brick, not like now. His parents had bought the tapes for "Holland During the Early Renaissance" and "The Birth of Swiss Factory-Farming", which they thought would be educational, but my friend knew someone who could get pirate copies of "Potato Famine Irishmen Start Eating Each Other" and "Sluts of the French Revolution".

It was brilliant! Every day after school, we'd go back to his house while his parents were out, then use the machine to go and watch Marie Antoinette's head being cut off. We could get close enough to hear the blade going "shhhhwwwww… chonk!", and then the executioner would hold the head up, and there'd be this spray of blood all over us, and we'd go "eeeeuuww!", but all the French people in the crowd would go "look, look, there are children, let them dip their fingers in the blood of the tyrant-queen so that they might share in this moment!", and we'd be really nervous and trying not to giggle but we'd dip our fingers in the blood anyway, only we'd start flicking it at each other, and all the Frenchmen would start laughing and chucking Marie Antoinette's guts around as well, and then we'd hear history going EEUUUUURRRRRRKKKK in the machine, and we'd realise that the tape was getting stuck, and then there'd be this great big rip in the universe and we'd be sucked out of 1792 and get thrown back into my friend's living room, except that we'd have blood all over us and there'd be a piece of the queen's colon on the sofa, and then we'd hear my friend's mum's key in the door and my friend would try to hide the guts while I got the tape out of the machine, except that it'd get jammed and I'd pull it so hard that it'd break and erase all the years between 1752 and 1821, and then his mum would come in and say "why are you covered in blood?", and we'd say "oh, no, it's not blood, it's just wine because we were being anointed by Pope Pius VI", and she'd go "tt" and then make us some dinosaur turkeys.

It's sad, really, that kids today take time-travel for granted and can't experience that kind of thrill. So, thanks to your family for inventing it!


A moving sentiment, however common the author. For I, too, have known that first rush of excitement on realising that one is no longer confined to one's own era. For myself, it came during my first eighteen months at l'Academie Sinistaire [see the preceding entries]. The principles of temporal perambulation had been known for some time, yet it was only in those early years of my career that the process was fine-tuned, so that one could travel from century to century with only a marginal risk of blowing a hole in one's own genetic structure and condemning oneself to a life of biological vampirism in an attempt to alleviate the agony. My correspondent recalls the joy of experiencing historical violence first-hand, though this had limited appeal for me - after all, it may be said that no violence has ever been more rewarding than that of my native nineteenth century - and I had far more interest in the possibility of romance.

Though I was only minimally deformed at this stage, it was already clear to me that no women would consort with my physical form without the compensation of money or a career in showbusiness, and in those days it was considered bad form to transplant one's brain into a more attractive cadaver (although, due to the notorious hypocrisy of the Victorian era, it was perfectly acceptable to transplant one's brain into the body of a giant murderous gorilla… today, historians shake their heads in disbelief at this antiquated double-standard). I therefore wondered if my ideal mate might be found in some century other than my own. Surely, there was some point in humanity's cultural development where I might be considered acceptable, even attractive? I had already visited five different alternative futures in which each individual member of Girls Aloud was seen as the embodiment of female beauty - and, perhaps less likely still, one where all five of them were at least considered "all right" - so it seemed quite clear that there were no limitations to human desire.

My excursions were not greatly successful. I did discover those eras in which women require the smallest possible amount of money or showbusiness before granting their favours (New York in 1979 and London in 2008, respectively), yet at no point did I encounter any individual who might be considered a "soulmate" in any meaningful sense. Perhaps the closest I came to a truly heartfelt relationship was at the far, far end of evolutionary history, an epoch wherein all human beings are degenerating into a primordial slime, and females are willing to procreate with anything at all in the hope of keeping the species solvent: I sympathised with this sort of desperation, and felt that I shared a genuine understanding with one of the natives, at least until realising that she was not a fabulous half-human mer-creature - as I had believed - but a disembodied pair of lips which had accidentally become stuck to a dolphin's back. Nor had I been using the blow-hole for its intended purpose.

Since this grave disappointment, my only attempt at a romance of any description was with a young Heather Mills during the latter part of the twentieth century: this relationship collapsed when it transpired that one of her limbs was hollow and filled with an army of tiny Eastern European prostitutes, who crept out in the middle of the night, opened the front door of my home, and allowed a horde of Polish immigrants to invade the premises while I slept.

These days, when anybody asks me "what do you look for in a woman?", I always reply: other, smaller women. One cannot be too careful.
Newer Post Older Post Home