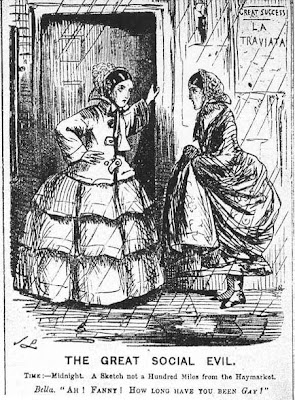 Since we now live in an age when we can freely travel between my own native nineteenth century and your gloriously unconcerned twenty-first century - an age which might be seen as a 150-year-long "buffer zone" between the distant past and the post-apocalyptic future, a dam-age, if you will - we should address the question of whether this might create unforeseen social problems on either side of the twentieth-century gulf. There are many who fear that the historical sanctity of the Victorian era may be violated by visitors from later periods, and that the mid-1800s may somehow find itself "polluted" by the culture of the early 2000s. Some have pointed out, for example, that the arrival of modern-day gun-culture and "gangsta rap" has begun to introduce whole new forms of violence, terror and social unease to Dickensian London. To which I say: good. As the head of an international criminal empire with interests in large-scale arms manufacture, this is exactly the sort of thing I like to hear.

It is unquestionably true that the culture of 2008 has had an immediate and savage impact on nineteenth-century society. Whereas the urchins of the capital once wanted nothing more than to pick a pocket or two, now their greatest desire is to pop a cap in Old Mr Chuzzlewit's ass. The Cockney delinquents, in particular, have taken to the gangsta lifestyle with some enthusiasm: they feel it speaks to them on a quite profound level, resonating with their own cultural preference for urban squalor and foetid, unapologetic misogyny. Yet this is not a thing to be lamented. These chimney-sweeps-turned-motherfuckers have very much made the art-form their own, as witnessed by (for example) the vernacular poetry of gun-toting rap combo Artful D and the Guttersnipers:

'Yo, I got more problems than I can tell of,
My bitch is syphilitic, her nose just fell off.'

Little wonder that if one consults the records of the British Library, then one will find that Lytton Strachey's historical masterwork Eminent Victorians has now been retitled Eminem Victorians. And though it may be true that 1848 has recently suffered its first wave of drive-by shootings - if I may use the vulgar form of the word "recently" in this context, and if I may indeed employ the modern style by beginning a sentence with "and" - even this represents a form of creativity, since I know for a fact that the only guns available in the late 1840s were artillery weapons left over from the US-Mexican War, and it can be something of a challenge to hit a bystander with a twelve-pound cannon from the roof of a moving horse-and-trap.

But if we truly have anything of value to learn from your world of tomorrow, then it may simply be this: the notion of absolute consumer-driven self-obsession, unhindered by taste, restraint, or any concept of moral consequence. The business practises of the late 1800s have always been rather shackled by the average citizen's concern over questions such as "what will happen if the children see?", "what will everyone think of this when I get to Heaven?", "is my dead husband watching me from the spirit realm?" and even "is it really ethical to make the coolies do all the work, even if those people are so much better at sweating than us?". For every Benjamin Disraeli who has merely wished the people to enjoy themselves, there has been a meddling William Gladstone to insist that it may be in some way wrong to use Indian children as cavity insulation. Fortunately, the Britain of 2008 has no such awkward difference of opinion between its political parties, and its argot has no equivalent of the phrase "morally uplifting". This has allowed our sweatshops to become even more abusive while producing even less of actual value.

This is particularly true of the White Peacock Syndicate's toy division, the Peking Panda Parts Company, which is even now using Oriental children to make interactive "My Chinese Pal" toys capable of asking questions like "will you be my friend?", "I like the Opium Wars, don't you?" and "why do I feel as if I'm a sliver of ten-year-old's brain-tissue that's been trapped in a small plastic box?". We can confidently predict that in the years to come, every cultural movement from Marxism to female suffrage will exist as nothing more than an excuse for merchandising. We might even imagine that by 1905, no little girl will be content without her poseable action-figure of Emmeline Pankhurst, with eagle eyes and realistic grip. The latter feature being particularly useful for holding on to railings.
Newer Post Older Post Home